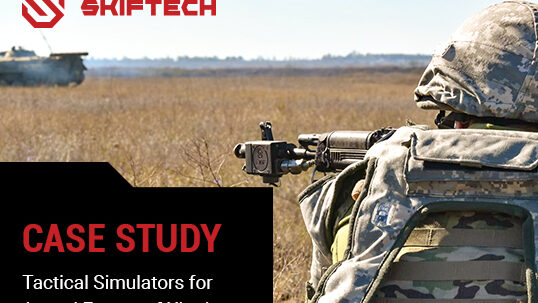 We prepared a case study in which we described how SKIFTECH’s outdoor simulators made it possible: motivate fighters to aim fire during exercises and reduce training costs.

At the exhibition, we presented our main novelties of 2021, as well as outdoor simulators for tactical training of shooters and military vehicle crews.

The competition of tank units of the Army

The competition of tank units of the Army of the Ground Forces of Ukraine which involved more than 60 servicemen has been completed in the Rivne region.

Four teams competed for the title of the best unit:

Tank crews of 169 Desna Training Centre named after Yaroslav the Wise were the winners. The units were rated in different categories. In particular, the tank crews trained in target shooting, and also conducted a tank duel with a simulated enemy.

A separate stage was dedicated to simulating a battle using the sets of military equipment from SKIFTECH. The kits allow you to simulate battle on the basis of standard armored vehicles, without the use of ammunition and without making changes to the design

All tank crews have already had experience in combat training using the sets of military equipment, because the equipment is regularly used for routine tactical training of crews.

The SKIFTECH equipment is used for routine exercises because it allows:

Follow the link and learn more about the set of weapons of military equipment – https://skif.cc/systems/the-military-equipment-armament-kit/